Review of “The Battle for Innocence” 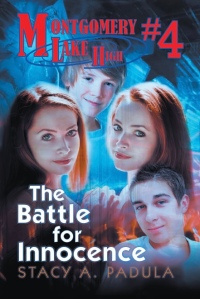 “Jon Anderson’s heart pounded heavily against his chest as he opened Chris Dunkin’s front door. He had walked through that door thousands of times before, but never during one of Taylor Dunkin’s ‘ragers.’ As Jon stepped into Chris’s living room, the odor of beer besieged his nostrils. Chris’s home—the normally calm spot, perfect for watching Patriot’s games—resembled a whirlwind.” In The Battle for Innocence by Stacy A. Padula, a Young Adult/Realistic Fiction novel, the main character, Jon Anderson, is thrown into just what the quote above says: a whirlwind. The story is set in western Massachusetts, and is a back-story to the Montgomery Lake High book series.

Jon, a seventh grader at Montgomery Lake Middle School, is the only Christian in his group of friends. As a result of the wild parties thrown by his best friend’s older cousin, Jon fears his closest friends are getting pulled into a world of temptation. He is stuck in an emotional battle, torn between pulling away from them and staying as a good influence in their lives. “‘God help me,’ Jon muttered aloud, hurdling over a large rock that lay at the edge of the lake. My heart is filled with conflict. I don’t want to separate myself from my friends. I don’t want to give up on them. I know you can change them. I know they don’t have to follow Taylor Dunkin’s path. Please intervene…I can’t abandon them. They need me. I love them. Please put someone in my life that can hold me accountable. I just want a Christian friend who will be able to understand my struggles.”

Meanwhile, Jon’s friend from church, Chantal Kagelli, finds herself in a similar dilemma across town. Chantal, a seventh grader at Sterling Middle School, has more than just one boy chasing after her. While her Class President, Andy, is trying to win her over with notes, cookies, and all the right words, her heart is aching over her interest in Jon. Chantal is petrified of her feelings for Jon, and decides that she should try to fight them off by getting closer to Andy. Despite many warnings from her twin sister that Andy could be a bad influence in her life, Chantal decides that it is more important to shine as a good influence in Andy’s life than to worry about the dangerous path he could take her down. Chantal finds herself in a whirlwind of her own, as she learns a life-changing lesson about the teenage world outside of church! The Battle for Innocence is filled with realistic party scenes and tempting situations that teenagers face during middle school and high school. The way the book is written allows readers to get inside Jon and Chantal’s heads and relate to their internal battles.

Out of all of Stacy A. Padula’s books that I have read, The Battle for Innocence is my favorite. It overflows with valuable background information about the main characters of the Montgomery Lake High series that makes the characters even more relatable and dynamic. I recommend this book to anyone age eleven and up. It has a lot of strong messages about peer pressure and making good decisions. I think anyone who has read the Montgomery Lake High books should read The Battle for Innocence to gain a deeper understanding of how Jon, Chris, and their friends got into so much trouble at such young ages. To learn more about the causes of teenage substance abuse and the gateway to addiction join Jon and Chantal in their battle for innocence.

Stacy Padula has spent the last 13 years working daily with teenagers as a college counselor, mentor, and life coach. She was named Top Inspirational Author of the Year for 2022 by the International Association of Top Professionals (New York, NY). In 2021, she was broadcast on the famous Reuters Building in Times Square as Empowered Woman of the Year. Her Gripped book series is currently being adapted for TV by Emmy-winning producer Mark Blutman. She is the founder and CEO of Briley & Baxter Publications-a publishing company that donates a portion of its proceeds to animal rescues each month. She has edited and published a variety of titles, including Boston Bruins Anthem Singer Todd Angilly and Rachel Goguen's The Adventures of Owen & the Anthem Singer, LaTonya Pinkard of Netflix's Last Chance U's Nate & His Magic Lion, and former NHL player Norm Beaudin's upcoming memoir The Original: Living Life Through Hockey. View more posts