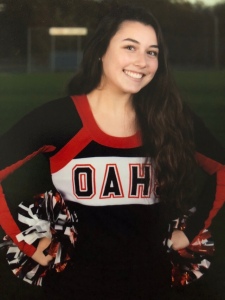 “The Forces Within” by Stacy Padula is full of twists and turns as well as an unexpected ending. It is the perfect read for someone who loves mystery or plot twists. The story is based on a group of teens who find themselves in an unfamiliar house while one of their friends is lost in what seems to be the vast woods. As their journey to find their friend begins, they also try to find themselves as well. Dealing with internal struggles as well relationship problems, this book is filled with everything interesting. I loved the book due to the fact that the struggles in the book are so relatable and true. It is a great read especially for teens and young adults. I recommend this to anyone who is looking for a mysterious yet dramatic book!

Samantha Waxman is a senior at Oliver Ames High School in Easton, Massachusetts. Some of her hobbies include cheering for her high school’s team, hanging out with friends, and spending time with her dog Rosie. Samantha’s favorite subject in school is history, and she is excited for her senior year.