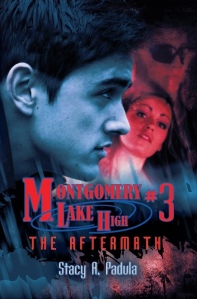 High school is supposed to be an open space of learning and change, where you are meant to respect and support your peers, no matter what they may be going through. Unfortunately, this is not always the case. People tend to judge others based on prior reputations, social status, looks, pretty much everything you could think of, to separate one crowd, one person from another. “The Aftermath” by Stacy Padula represents party animal Jason David’s experience with trying to change for the better in the extremely restricting environment of Montgomery Lake High.

In “The Aftermath,” Jason takes a step back to look at his life and analyze what he does on a daily basis. At 15 years old, Jason is a popular jock, who gets good grades, but most importantly, loves partying. He recognizes that this constant party lifestyle is dangerous at such a young age, and decides to make a switch in his mindset. He soon realizes that because of his reputation, some might be skeptical of the possibility of his transformation. Throughout the book, Jason is tested with rumors and temptation, but he comes out victorious and serves as a good example to not only his friends, but to those who didn’t believe he could transform himself.

Rebecca is a junior at Brooklyn Technical High School in Brooklyn, New York. As a city kid, some of her hobbies include riding the subway and exploring the city with friends, making all kinds of art and traveling with her family and experiencing new and exciting things along the way.